The Tome of Bill Series - Vol 1 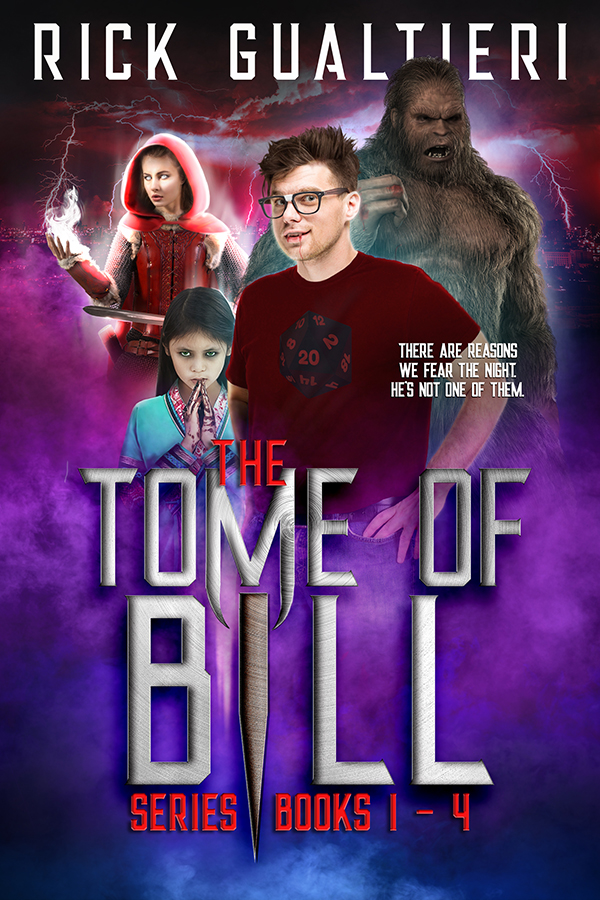 THE TOME OF BILL SERIES OMNIBUS

There are reasons people fear the dark. Bill Ryder isn’t one of them.

This omnibus edition contains the first FOUR novels of the bestselling Tome of Bill series – over 1000 pages of urban fantasy with a nasty overbite.

Gamer, Geek, and Legendary Vampire – Bill Ryder is an unlikely hero trying to survive in a world of undead horrors. Despite awesome powers, loyal allies, and a Brooklyn-sized attitude; the odds are stacked heavily against him. Bill must fulfill his destiny and save the world from the ancient terrors that threaten it – all while trying to build some semblance of a social life.

BILL THE VAMPIRE
Bill Ryder was a dateless geek until he met a girl to die for. So he did. Unfortunately for him, that was just the beginning of his troubles. He awoke as a vampire, one of the legendary predators of the night. Sadly, fangs or not, he was still at the bottom of the food chain. Now he finds himself surrounded by creatures stronger, deadlier, and a lot cooler than he is … and they all want to kick his teeth in. Join Bill in this hilarious tale of immortal monsters and the man who’s not afraid to tell them off, even if it gets him killed – permanently this time

SCARY DEAD THINGS
One of the most powerful vampires in the world wants Bill Ryder’s head. A pint-sized princess wants the rest of him. It’s just not clear which fate is worse. All the while, new and powerful forces have begun to emerge from the shadows around him. Are they friend or foe? Knowing Bill’s luck, do you even have to ask?

THE MOURNING WOODS
A war is brewing between vampires and sasquatches, ancient enemies from the dawn of time. If it can’t be stopped, the veil will be lifted and all of humanity’s darkest nightmares will be unleashed to wreak havoc. The vampire nation dispatches Bill Ryder to a faraway land to broker peace, but it’s not going to be easy. His enemies want him dead. Sadly for him, some of his allies do too.

HOLIER THAN THOU
On the eve of war, The Icon – legendary slayer of the vampire race – has arisen. There’s just one small catch: Bill Ryder is in love with her. Panic is about to break out within the ranks of the undead and Bill is caught smack dab in the middle of it. Now he finds himself in a race to save the person fated to destroy him. Talk about being damned if you do.

Join Bill in these tales full of monsters, mayhem, and foul-mouthed laughs. If you enjoy The Dresden Files or The Iron Druid Chronicles then you’re likely in for a bloody good time.