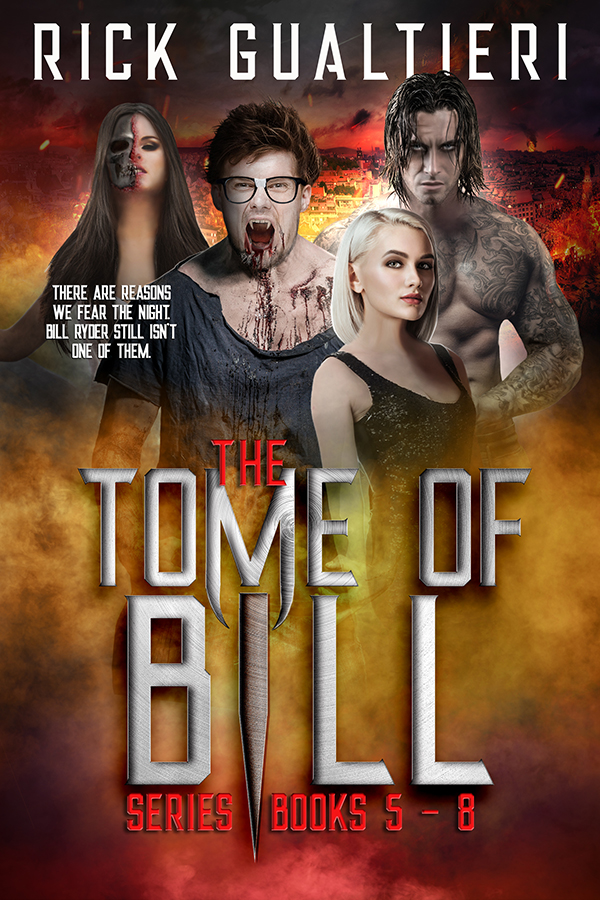 THE TOME OF BILL SERIES OMNIBUS

There are reasons we fear the dark. Bill Ryder needs to become one of them.

This omnibus edition contains the final FOUR novels of the bestselling Tome of Bill series – over 2000 pages of urban fantasy insanity.

Gamer, Geek, and Legendary Vampire – Bill Ryder is an unlikely hero trying to survive in a world of undead horrors. Despite awesome powers, loyal allies, and a Brooklyn-sized attitude; the odds are stacked heavily against him. Bill must fulfill his destiny and save the world from the ancient terrors that threaten it – all while trying to build some semblance of a social life.

GODDAMNED FREAKY MONSTERS
Three months have passed since the fateful encounter in New York City that ended with the disappearance of Bill Ryder. Now he’s back. Civilization teeters on the brink of chaos. Mythical beasts, once thought the stuff of fantasy, are breaking through the veil, intent on waging war against mankind. At their forefront stands an ancient evil, the last remnant of a cult thought long dead, and he’s about to cut a swath of destruction through the world not seen since biblical times. Bill’s only chance is to muster every bit of attitude he can – because if he fails, Hell on Earth will become far more than just a corny saying.

HALF A PRAYER
An unstoppable terror from the dawn of time has awoken deep beneath the Earth and is headed Bill’s way. To make matters worse, he’s been deemed a traitor by those he thought to be his allies. Now he finds himself fighting off enemies from all sides while warring with his emotions. Talk about lousy timing for introspection. As the world crumbles around him, Bill must rise to the destiny he’s been trying so long to deny – because if he doesn’t, his love life will be the least of his worries.

THE WICKED DEAD
Bill Ryder has a powerful destiny. He just never expected it to involve an amnesiac bloodsucker, a bunch of D&D dorks, and a hormonal witch. It’s time for him to embrace his fate. Ordered to storm the vampire stronghold in Boston, Bill must approach the doorstep of the invincible undead warlord he’s destined to face. If he stands tall and faces his fate, the world might just have a chance of surviving. If he fails, an unquenchable evil will destroy everything Bill knows and loves. Why can’t the end of the world ever be easy?

THE LAST COVEN
A goddess returned, a war between primal powers, and a prophecy to fulfill. That’s a lot of crap to heap on anyone’s plate, but that’s exactly what Bill Ryder has to deal with. It’s finally time for him to master his powers, sort out his relationship woes, and figure out how to survive his date with destiny. Because if he can’t get his act together, the curtain will fall and mankind will be forever plunged into everlasting darkness.

Join Bill in these tales full of monsters, mayhem, and foul-mouthed laughs. If you enjoy The Dresden Files or The Iron Druid Chronicles then you’re likely in for a bloody good time.